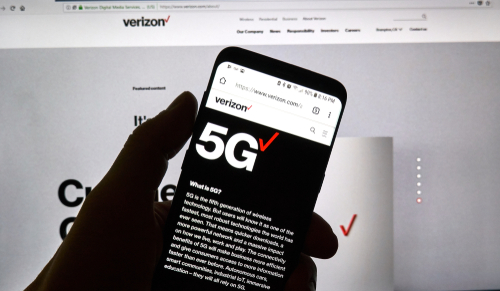 Verizon Communications (NYSE: VZ) stock was downgraded on Monday morning by Instinet analysts on doubt over its 5G launch. Verizon’s stock fell by 0.4% during pre-market hours, however, shares were trading 0.2% higher shortly after the opening bell.

Instinet analyst Jeffrey Kvaal downgraded Verizon’s stock from a “buy” rating to a “neutral” rating. Kvaal downgraded the stock, saying he has less confidence in the Company’s ability to raise prices around the broader 5G launch, according to MarketWatch.

In addition to Kvaal’s downgrade, he also lowered his price target on the stock from USD 67 per share to USD 65 per share.

“Verizon atypically reduced unlimited pricing in August," Kvaal wrote. "While the reduction no doubt spurred subs to migrate from metered to unlimited plans, we also would have expected that at the initial, higher price."

Moving forward, Kvaal expects the pricing action from AT&T (NYSE: T) will “erode” the recent strength that Verizon has been witnessing with net additions.

"A flaring price skirmish leaves us leery of both upward estimate revisions and multiple expansion," he concluded.

Despite the downgrade, Verizon shares are still up 7.42% this year.