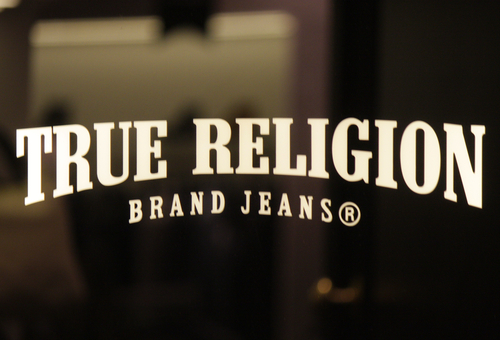 True Religion Apparel Inc. (NASDAQ: TRLG) is one of the most well known jeans maker in the United States and filed for bankruptcy reorganization today. In hopes of reducing their debt, a private equity firm called TowerBrook Capital Partners proposed a deal with lenders to reduce True Religion’s debt by about three quarters as it continues to operate. True Religion also hopes to strengthen their brand image as a whole and position the company for future growth and success. This would mean that they would have put more resources into their online efforts.

True Religion was founded in 2002 growing 3 times as big in size from 2007 through 2012 with their collection of pricey designer jeans totaling to $490 million in revenue in 2013. However, as a result of last year’s cut costs, True Religion closed down 20 stores. They began to experience a decline in sales starting in 2013 due to the trend of consumers moving away from traditional retail to online shopping. This shift also resulted in bankruptcies in other South California based retailers such as Wet Seal, American Apparel Inc., Nasty Gal Inc., and Pacific Sunwear of California Inc.

On January 28, True Religion lost $78.5 million on revenue of $369.5 million in the end of their fiscal year. Their current plan is to swap debt for new equity that will reduce the debt by more than $350 million and is going to obtain additional financing of up to $60 million from Citizens Bank.