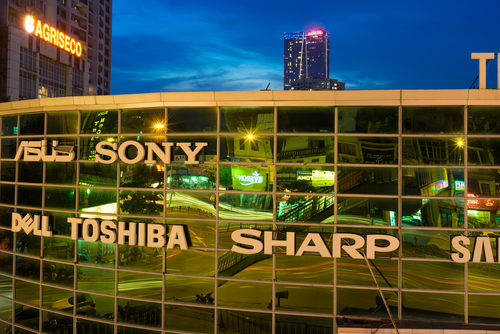 Toshiba's hardships have not been hidden from the international market as the conglomerate has struggled to keep its head above the water in recent times. However, it now seems that two U.S. companies are teaming up to throw Toshiba a lifeline that may well be just what it needs to remain afloat. Apple Inc. (NASDAQ: AAPL) and Dell have now officially decided to join up on a bid that is being made for the memory chip business of Toshiba.

The bid has not been initiated by either of the tech giants but by Bain Capital. Bain Capital offered a revised bid for the memory chip business, and this time, both Apple and Dell are part of the deal, meaning that these US-based tech giants will also be making investments in Toshiba. This has now been announced officially by Bain Capital. Interestingly, Apple's name has also been making the rounds in talks of other bids that are being made for Toshiba's business.

A number of players have been keen to acquire this business of Toshiba's but the Japanese brand confirmed last week that they are more oriented towards the offer made by Bain Capital consortium. According to the rumors, the consortium has made a bid to buy Toshiba's chip business for about $18 billion. There are three significant contenders for this business and Bain's success here is a substantial victory for the consortium. Despite its indication that it approved of the Bain Capital offer, Toshiba has also muddied the waters a bit by pointing out that it only has a 'non-exclusive' agreement with Bain, meaning that it is still free to keep negotiating with others who show interest in them. This means it could still have dealings with Foxconn and Western Digital, which are also in the running for the chip business of Toshiba.

The deal from Bain Capital also brings in the SK Hynix, the South Korea based chip manufacturer, Innovation Network Corp. of Japan and Development Bank of Japan. Bain's deal has taken the lead in grabbing Toshiba's interest because Western Digital wanted to take control of the business, which was not something that Toshiba was willing to do. In another interesting development, Toshiba has filed a lawsuit against Western Digital claiming that the latter tried to disrupt the sale process.