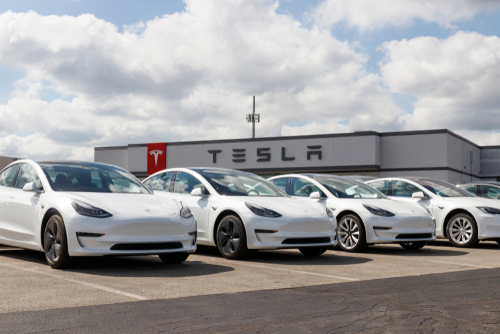 Tesla (NASDAQ: TSLA) shares gained 4.4% during Friday’s pre-market hours after smashing its fourth quarter delivery estimates. The Company’s shares were trading at an all-time high of USD 450.00 per share shortly before the opening bell.

During the fourth quarter, Tesla reported record deliveries of approximately 112,000 vehicles, exceeding expectations of 106,000 total vehicles. Tesla produced almost 105,000 vehicles at the end of the quarter.

Of the total deliveries, Tesla’s Model 3 vehicle accounted for 92,550 deliveries, while the Model S and X only made up a small fraction of 19,450 deliveries.

Overall, in 2019, Tesla was able to approximately 367,500 total vehicles, representing a 50% increase year-over-year and falling in-line with its guidance.

Tesla mentioned in the press release that it continues to focus on expanding its production in both the U.S. as well as its newly functional Shanghai facility. The Company highlighted that the Gigafactory has already produced just under 1,000 customer salable cars and have begun deliveries.

Tesla continues and notes that its production run-rate capability is much greater than 3,000 units per week, excluding local battery pack production, which began in December.

“Our net income and cash flow results will be announced along with the rest of our financial performance when we announce Q4 earnings. Our delivery count should be viewed as slightly conservative, as we only count a car as delivered if it is transferred to the customer and all paperwork is correct. Final numbers could vary by up to 0.5% or more. Tesla vehicle deliveries represent only one measure of the company’s financial performance and should not be relied on as an indicator of quarterly financial results, which depend on a variety of factors, including the cost of sales, foreign exchange movements and mix of directly leased vehicles,” concluded Tesla.