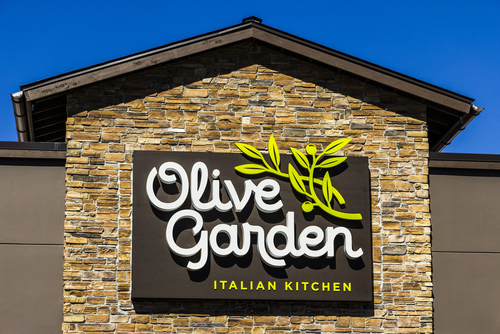 Darden Restaurants, Inc. (NYSE: DRI), whose brands include Olive Garden, announced on Tuesday that it had raised its forecast for fiscal 2019, sending premarket share prices up nearly 5%.

According to CNBC, Olive Garden, which accounted for about half of Darden’s revenue in the second quarter, saw their own same-store sales increase by 3.5%. Although there was a decline in traffic for the Italian chain restaurant, a price hike in menu items such as the ‘Never Ending Pasta Bowl’ helped boost sales.

Gene Lee, Chief Executive of Darden Restaurants commented that the traffic decrease was a result of reduced promotions by Olive Garden. In a conference call with analysts, Lee said that “If we had the same incentive level as the prior level, we would have beat the industry. But we aren’t concerned about that, what we are really concerned about is building a really healthy guest base.”

Lee said that Olive Garden is trying to take advantage of the strong consumer environment. He also noted that Olive Garden will not change its promotional strategy as long as it meets its same-store sales in the latter half of the year.

Per CNBC, the restaurant company raised its full-year forecast, saying it now expects to earn between USD 5.60 to USD 5.70 share for the fiscal year, and the same-store growth of 2.5%. These numbers are said to match analysts’ estimates of USD 5.65 and same-store sales growth of 2.5%.

In Tuesday’s premarket, Dardan shares were up by 3.65%. They are up nearly 3% since the start of the year, with the restaurant operator’s market value being valued at USD 12.3 Billion.