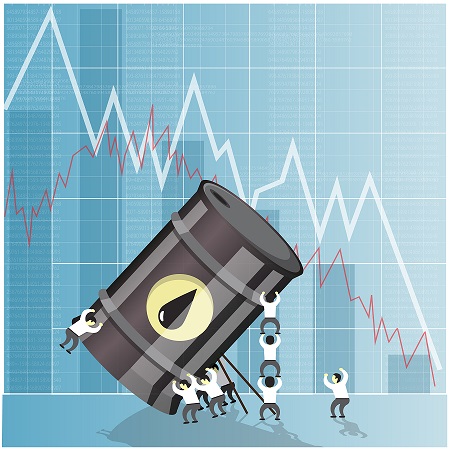 With oil prices sliding, the Standard & Poor 500 index closed with a 0.1 percent or 1.42 points loss at 2,435.61 on June 21 due to losses made by the energy sector. Eight of 11 principal sectors went into negative territory. A surge in the biotechnology shares pushed the Nasdaq Composite to achieve moderate gains.

The DJIA or Dow Jones Industrial Index went down by 0.3 percent or 57.11 points to scrape 21,410.03. More than 50 percent of blue chip stocks ended with losses. The list of top losers include Caterpillar Inc with 3.8 percent, Chevron Corp 1.9 percent and Du Pont Co with 2.7 percent down respectively.

Oil prices drop pushed energy shares down by 1.6 percent. The list of top gainers included technology and healthcare shares, with a 0.7 percent and 1.2 percent respectively. Crude oil futures went into bear market territory after a 20 percent dip from recent highs. The losses were extended into June 21. It ultimately settled down at about two percent at $42.39 per barrel. This happened as traders disregarded the decline in the crude inventories. They instead focused on rise in the domestic production. As American producers increase oil production, a few analysts anticipate oil to be traded in the region between $30 to $60 per barrel range for the rest of 2017.

According to Maris Ogg of Tower Bridge Advisors, oil is in adequate supply with American producers drilling oil and pumping it as gas prices go over $50. She said that gas and oil demand continues to decline as machines get more efficient and consumption becomes low. She, however, is not much worried when it comes to oil prices volatility, pointing out that energy sector at present is one of smallest sectors making up only six percent of Standard & Poor 500. It follows that this sector's impact on the overall earnings is actually small.

Only technology dense Nasdaq Composite Index went against the trend. It closed up 0.7 percent or 45.92 percent higher to reach 6,233.95. This was principally due to increasing price of biotechnology shares. A 4.1 percent up of iShares Nasdaq Biotechnology ETF happened after reports came in of President Trump drafting a particular executive order which will ease regulations on the industry.

Most Asian stocks closed lower, with only Shanghai Composite Index moving up by 0.5 percent. European stocks ended a little lower in tandem with the slide in oil prices.