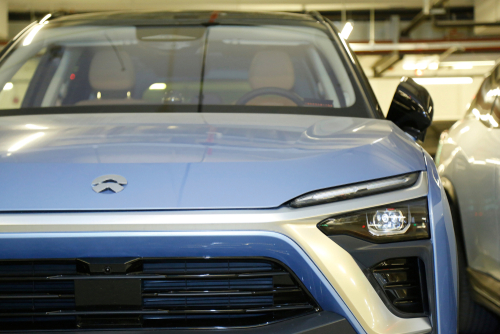 For the quarter, Nio reported earnings loss of RMB 2.42 per share on revenue of RMB 1.63 Billion. Nio’s revenue declined by 52.5% sequentially, however, the Company was able to cut its losses. Earnings per share loss fell by 56.6% from a loss of USD 3.20 in the previous quarter.

Nio’s significantly lower revenue was a direct result of its lower production for the quarter. The Company witnessed its vehicle sales plunge by 54.6% to RMB 1.53 Billion. During the quarter, Nio delivered a total of 3,989 ES8 vehicles compared to 7,980 in the previous quarter. As a result, Nio reported a negative vehicle margin of 7.2% compared to a positive margin of 3.7% in the fourth quarter.

The Company said that the lower-than-expected ES8 deliveries was a result of a greater than anticipated slowdown in monthly deliveries due to electric vehicle subsidy reduction as well as the ongoing maco-economic slowdown ongoing in China.

“Deliveries of the ES8 in April 2019 were 1,124 vehicles, which reflected a greater than anticipated slowdown in monthly deliveries primarily due to the electric vehicle (EV) subsidy reduction announced in late March, as well as the slowdown of macro-economic conditions in China which has been exacerbated by the US-China trade war, particularly in the automotive sector where wholesale passenger vehicle sales were down approximately 15% year on year from January to April 2019, compared to the same period of last year.” said Nio in its earnings release.

Moving forward, Nio is expected to begin production of its second vehicle model, the ES6, a 5-seater high-performance premium electric SUV. Nio entered into a manufacturing agreement with Jianghuai Automobile Group in April to develop the ES6.

“We are excited that in June, as scheduled, our second production model, the ES6, a 5-seater high-performance premium electric SUV, will roll off the production line and the first deliveries to NIO users will begin in the same month.” said William Li, Founder, Chairman and Chief Executive Officer of NIO. “The ES6 received broad-based positive feedback from the recent Shanghai Auto Show, and the early reviews from our ES6 test drive campaign launched in May bode well for continued positive momentum. We currently have more than 12,000 ES6 pre-orders (refundable deposit orders), among which over 5,000 pre-orders were placed since the Shanghai Auto Show began five and a half weeks ago. We are confident that as more and more new potential users start to experience the ES6 first-hand, the vehicle’s competitive features and price will appeal to a growing number of premium automobile buyers.”

As for the second quarter, Nio expects to report total revenue between RMB 1.13 Billion and RMB 1.29 Billion, representing a sequential decline of 20.7% to 30.5%. The Company expects total delivery of vehicles to be between 2,800 and 3,200.