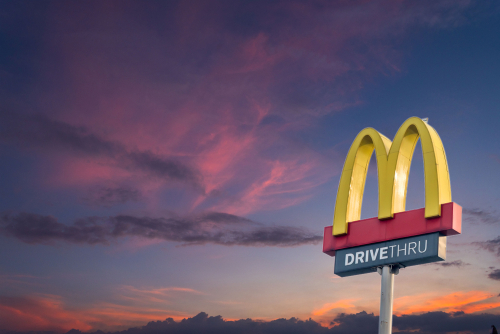 The fast food chain is trying to draw in diners by revamping stores, using fresh ingredients and pushing sustainability initiatives such as one that requires beef suppliers to reduce their use of antibiotics over the next few years.

Comparable sales, or sales at stores open for at least 12 months, in the U.S. rose 2.3% in the fourth quarter as the Chicago-based Company said Wednesday it benefited from higher prices and increased spending on pricier items. Comparable sales at restaurants outside the U.S. grew a stronger rate in the period.

Overall, McDonald’s sales fell 3% from the year earlier to USD 5.16 Billion, in line with analyst expectations. Excluding currency-translation effects, revenue would have been flat.

Shares of McDonald’s rose 2.7% in the morning trading as the Company delivered stronger-than-expected profit in the latest period.

Investors also cheered margins at company-operated U.S. restaurants coming in slightly ahead of what analysts expected, according to Gordon Haskett Research Advisors, as the company spends to remake its locations.

“It looks to me like they’ve gotten a much better handle on the ability to manage U.S. restaurant-level margins in the backdrop of a very aggressive U.S. remodel cycle,” said Jeff Farmer, an analyst at Gordon Haskett.

The Company reported a profit of USD 1.42 Billion, or USD 1.82 per share, compared with USD 699 Million, or 87 cents per share, a year earlier. After accounting for a tax benefit and an adjustment related to the federal tax overhaul, the Company said it earned USD 1.97 per share. Analysts had expected USD 1.89 per share.

McDonald’s reported Wednesday that traffic at domestic stores, its largest market, weakened last year. Comparable guest counts, which measures transactions at restaurants open for at least 12 months, declined 2.2% in 2018 compared with a 1% gain in 2017. Globally, traffic ticked up 0.2% last year.

McDonald’s also said it expects long-term average sales growth across the Company of 3% to 5% ad earnings per share in the high-single digits.

This year, the Company expects to open 1,200 restaurants and spend about USD 2.3 Billion on capital expenditures, with USD 1.5 Billion spent on the U.S. business. Globally, the Company predicts it will add a net 750 new stores this year.