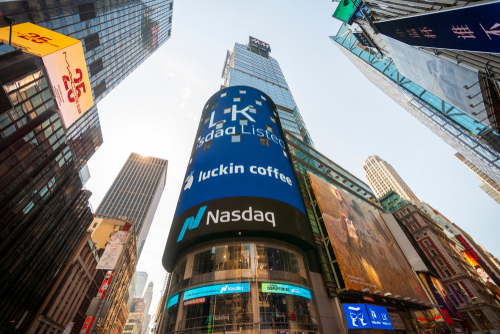 Despite the losses, Luckin’s earnings loss was much better than analysts had anticipated during the quarter, leading investors and analysts to believe that losses were cutting down while revenue was exponentially gaining.

Luckin also rapidly expanded during the quarter, increasing its store count by 209.5% to 3,680 stores. Average monthly transacting customers increased by 397.5% to 9.3 million at the end of the quarter, while average total net revenues from products per store were USD 62,900, increasing by 79.5% year-over-year.

In comparison to its competitor Starbucks (NASDAQ: SBUX), Luckin was able to launch more locations in a shorter period of time in China. Starbucks opened 4,125 stores in China in nearly two decades.

Leading into Friday, shares continued to gain amid reports of optimism revolving around the U.S.-China trade wars, according to Forbes. Luckin shares rallied by as much as 22.1% on Friday.