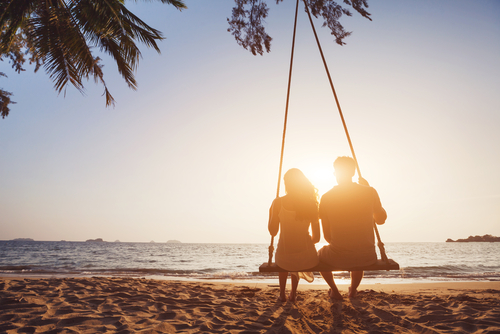 LoveSync, a USD 57 button designed by a couple in Cleveland that allows you to signal to your partner in silence that you want to have sex had their KickStarter campaign launched on Monday and the interesting concept has already received tons of mixed reviews. The founders Ryan and Jenn Cmich, came up with the idea when they lost the “joys of romance” after being married for about 15 years and claims they have “benefited from the LoveSync button in our own relationship over the past months.”

The buttons themselves come in a set for each person’s bedside table and when tapped, sends a signal to your partner’s button. If both buttons are tapped within a 15-minute window, both buttons will glow green which allows both parties to know that they’re both horny. Additional taps can increase the “consensus window.” As shown in the KickStarter campaign, 2 taps will increase the “consensus window” to 1 hr, 3 taps will be 2.5 hrs, 4 taps equals 8 hrs, and 5 taps equals 24 hours. The device is designed to reduce the risk of initiating sex and getting rejected. As stated from the KickStarter Campaign, “Take the Luck out of Getting Lucky and make your move with confidence!”

The fundraising campaign has already raised more than half of its USD 7500 goal and has 84 backers, but the internet isn’t exactly sold on the idea or the device. For one, the Internet is confused on how or why the campaign states that you can push the button “anonymously” when the buttons are advertised for couples. The pricing of the buttons has also been criticized when you can simply ask your partner for sex.