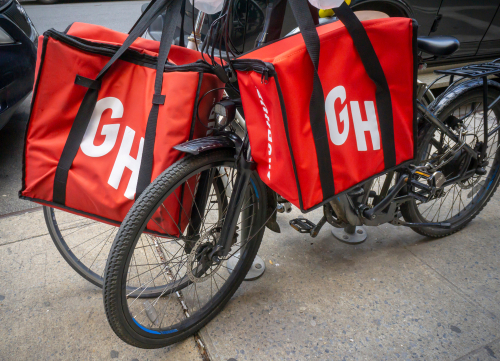 On Tuesday, Grubhub received five downgraded, including double downgrades from both Bank of America Merrill Lynch and Oppenheimer, according to CNBC.

Oppenheimer flipped its rating on the stock from “buy” to a “sell” rating following the earnings release, citing concerns over growing competition. The firm also slashed its price target from USD 91 per share to USD 34 per share.

In 2019, Grubhub has lost more than half of its market valuation due to rising competition from other food delivery services such as UberEats, DoorDash, and PostMates. In the third quarter, Grubhub witnessed its orders decrease by 15% year-over-year, which led the Company to report revenues of USD 322 Million, missing estimates of USD 330.5 Million.

Helfstein believes that Grubhub is the weaker player among its competitors and believes it will impact its investor demand with slowing growth and declining EBITDA.

For the next quarter, Grubhub said it expects revenue between USD 315 Million to USD 335 Million, below analysts’ estimates of USD 388 Million.

“The food delivery market is increasingly irrational as competitors flood the market with rewards and incentives, making online diners less loyal,” said Bank of America analyst Nat Schindler in a note to clients.

In order to accelerate orders, Grubhub decided to focus on adding non-partner restaurants and also expanded its national chain integration and diner promotions.

“We will be moving quickly, spending more and trying many different strategies over the next 12-18 months to increase restaurant supply aggressively while making our diner experience more sticky - effectively taking action to remove any reason for diners to look anywhere else,” the company’s Chief Executive Officer Matt Maloney said in a note to shareholders on Monday.