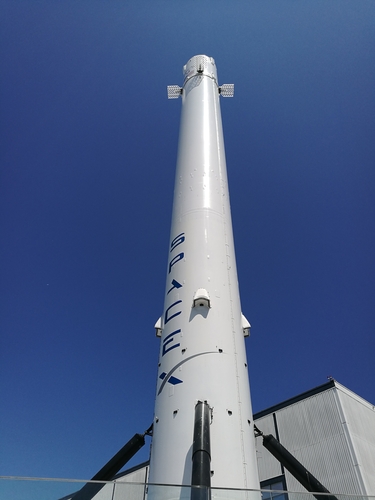 Elon Musk, founder of SpaceX, presented his new updated plan for the colonization of Mars at The International Astronautical Congress in Adelaide, Australia on Friday. But he said that the biggest problem for the company would be the expenses.

"I think the most important thing I'm going to convey in this presentation is that I think we've figured out how to pay for it. This is very important." he said, referring to the spacecraft.

Musk previously called the spacecraft. the “Interplanetary Transport System”, but changed the name to the BFR, short for the “Big F---ing Rocket.” Musk says the name is still not finalized and that the company would be looking into other names.

The updated concept depicts a smaller rocket than the previous concept. SpaceX will eventually use the BFR and it’ll replace current launch and spacecraft systems such as the Falcon 9, Falcon Heavy, and Dragon.

Musk plans to the use the BFR to colonize Mars in the future. The BFR will able to carry up to 100 people into orbit, before it returns back onto the launch pad, as Musk showed in the presentation.

SpaceX originally planned for the first landing on Mars in 2022. The new timeline Musk explained was that two cargo landers would land in 2022, and then two years after in 2024, four more would land in 2024. Among those four, two are expected to carry passengers. From there on, more spacecrafts will land on Mars, eventually creating a colony.

Inside the rocket, there will be room for about 40 crew cabins for the passengers aboard. Musk says he expects two to three people per room. The rocket will also include areas such shelter from radiation storms, a viewing room, entertainment areas, and other common areas.

In order to cut down more, SpaceX will be reusing parts from other spacecraft and launch systems.

Musk then goes on to explain how the rocket would function. He says that it will burn on methane  (CH4) with oxygen, in which he hopes he will be able to collect those resources from the carbon dioxide in Mars’ air and water.

This seems like an insanely expensive concept, but Musk covers how SpaceX would cover the costliness of the build. He said that he would dump all of SpaceX’s revenue into funding the BFR. In the future, SpaceX will be halting all operations and projects in order to fund the Mars project.

Not only would the BFR just be used for potential colonization, but it will also be used to do moon missions without refueling. It will be able to provide services and resupply NASA on the International Space Station.

And eventually, all of these uses for the BFR will payout for SpaceX.

It may still be a long way to go, but the possibility of being able to sustain life on another planet seems very likely with SpaceX’s new plan. SpaceX is still in the works being able to modify the spacecraft as well continuing to cut down costs to make it more accessible.

"I feel fairly confident that we can complete the ship and be ready or launch in about five years," Musk said, "Five years seems like a long time to me."

wow he is amazing and a brilliant man of the 21st century!

Please let this guy just be our president and not Trump I would go up to outer space for this mission :)