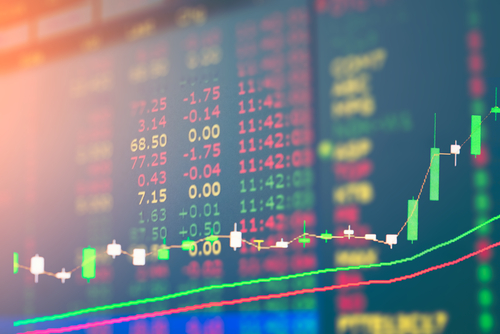 U.S. stocks opened weaker on Wednesday after New Year’s day, as the Dow Jones Industrial Average fell by 334.18 points or 1.4% since Monday. Despite the decline, markets bounced back sharply throughout early trading sessions on Wednesday, erasing the losses.

The rebound was led primarily by large intraday gains among tech and bank stocks. The Dow Jones Industrial Average gained 385.74 points or 1.6% from Wednesday’s low to the high. The Nasdaq Composite gained 147.9 points or 2.2% while the S&P 500 Index rose by 40.08 points or 1.6%.

Markets opened lower on Wednesday following the new year due to worries over the economic health of China, which has fueled an aversion to assets perceived as risky, according to MarketWatch.

Beijing’s official read of manufacturing for December, released Wednesday, showed a more severe drop than one issued earlier, reflecting a fall to the weakest level since February 2016. The Caixin manufacturing purchasing managers index fell to 49.7 in December. A reading below 50 signals a contraction in activity, the first in 2 1/2 years, according to MarketWatch.

The weaker index’s worried investors at first as it possibly signaled a reduction in spending or costs among the U.S. and China. Despite the official read, U.S. markets began to edge into positive territory by midday on Wednesday.

Investors are also closely watching the U.S. government’s partial shutdown that is closing in on its second week. President Donald Trump is also inviting lawmakers on Wednesday to discuss reopening the government over the dispute of funding for the U.S.-Mexico border wall.

“In the past, government shutdowns haven’t really effected markets,” Sam Stovall, Chief Investment Strategist for U.S. equities at CFRA Research, told MarketWatch. If Congress and the White House are able to come to an agreement to end the ongoing partial shutdown soon, that should hold true, Stovall predicted. “But today’s selloff could be attributed to the perceived lack of leadership in Washington,” he said, as the shutdown underscores what could be a year of increased policy uncertainty, including questions surrounding U.S. trade policy.