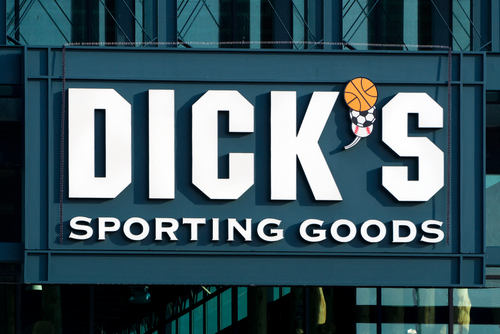 Shares of Dick’s Sporting Goods (NYSE: DKS) dropped more than 9% on Wednesday morning following a report that the retailer sold less merchandise during the second quarter than analysts were expecting.

The sporting-goods retailer earned USD 1.20 a share during the second quarter, easily beating the USD 1.06 that Wall Street analysts surveyed by Bloomberg were expecting. However, Dick's recorded second-quarter sales of USD 2.18 Billion, missing the USD 2.23 Billion that was anticipated.

Sales at the Company’s stores, which were open for at least 12 months, also plunged 4% during the quarter, compared to a 0.6% decline that was expected. The poor comparable sales results were partly blamed on a slowdown in Under Armour (NYSE: UAA) sales. Under Armour has been moving into low-price retailers, like Kohl (NYSE: KSS), which has taken a toll on companies like Dick’s that try to sell inventory at higher price points.

"As expected, sales were impacted by the strategic decisions we made regarding the slow growth, low margin hunt and electronics businesses, which accounted for nearly half of our comp decline," Dick’s Chief Executive Officer Ed Stack said in a statement. "In addition, we experienced continued significant declines in Under Armour sales as a result of their decision to expand distribution."

Dick's said online sales increased 12% during the quarter, boosted by some of its private-label brands. The Company has been investing more in its own in-house lines, like Second Skin, which is strikingly similar to Under Armour in style and fit. It's also seen success with a line for women called Calia by Carrie Underwood.

Shares of Dick's Sporting Goods have climbed about 26% so far this year, bringing the Company's market cap to about USD 3.7 Billion.

Incredible update of captchas breaking package "XRumer 16.0 + XEvil 4.0":
captcha solving of Google (ReCaptcha-2 and ReCaptcha-3), Facebook, BitFinex, Bing, Hotmail, SolveMedia, Yandex,
and more than 8400 another categories of captchas,
with highest precision (80..100%) and highest speed (100 img per second).
You can use XEvil 4.0 with any most popular SEO/SMM software: iMacros, XRumer, GSA SER, ZennoPoster, Srapebox, Senuke, and more than 100 of other programms.

Revolutional update of captcha solving software "XRumer 16.0 + XEvil":
captchas solution of Google (ReCaptcha-2 and ReCaptcha-3), Facebook, BitFinex, Bing, Hotmail, SolveMedia, Yandex,
and more than 8400 another categories of captcha,
with highest precision (80..100%) and highest speed (100 img per second).
You can use XEvil 4.0 with any most popular SEO/SMM programms: iMacros, XRumer, GSA SER, ZennoPoster, Srapebox, Senuke, and more than 100 of other software.