Dogecoin, a cryptocurrency created as a joke after an internet meme, surpassed a market cap of over $2 billion on Sunday. The parody cryptocurrency has shown impressive movement since the end of November.

In late November, prices were for Dogecoin were approximately $0.0013. Prices surged to $0.01 during Christmas as the coin broke a market cap of $1 billion. Prices hit another all time high of $0.0187 and a market cap of $2.11 billion, according to Coinmarketcap.com.

Since late November until Sunday’s all time high, prices for Dogecoin have jumped over 1300 percent in slightly over a month period. Bitcoin prices have risen 1500 percent in the past year, as of Monday’s prices of $14,700, according to Coinbase. 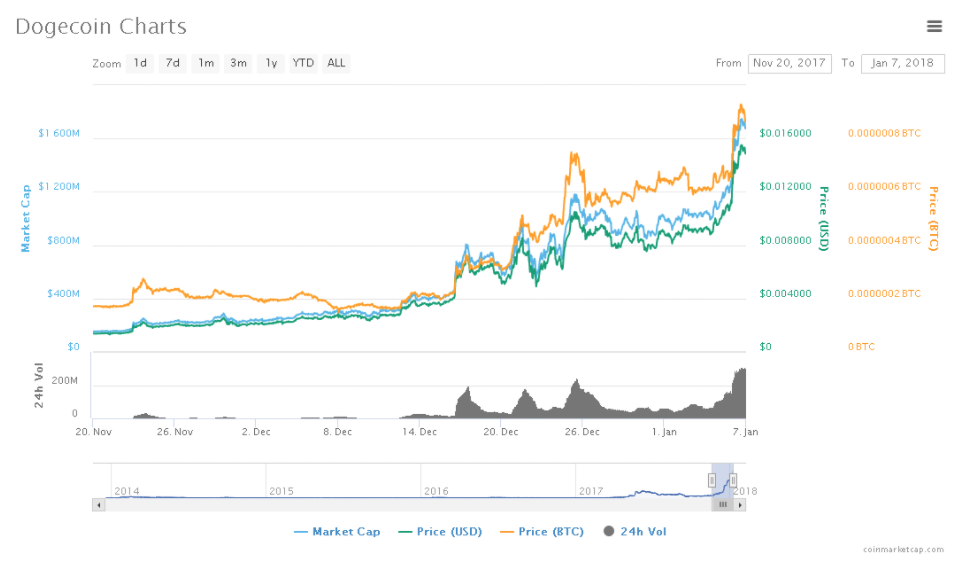 Unlike cryptocurrencies such as bitcoin or ethereum, dogecoin is considered an “alt-coin.” Coins like dogecoin can be purchased, mined, or traded just like bitcoin, but dogecoin has up to 100 billion volume compared to bitcoin’s 21 million volume cap.

Jackson Palmer, creator of Dogecoin, created the cryptocurrency purely as a joke based off the Japanese shiba inu dog meme back in 2013. Palmer and Billy Markus sat down one night and simply created the coin without any work, he told Motherboard. Palmer had the idea while Markus helped create the virtual currency.

Palmer says its concerning how the cryptocurrency has gained momentum even though it the company has not released any software updates in the past two years. Even the creators and current team are surprised by the trend lately.

"To me, this proves that we don't need shiny features or a ton of innovation and even with a conservative – and in my own case completely distracted – development team for a boom," said developer Patrick Lodder.

Back in March, Palmer told Coindesk that dogecoin will eventually become outdated and organically the whole thing will wind down, yet it has seen the most movement in the past few months since 2014.

The rise of alt-coins can also be heavily contributed to the low prices as opposed to bitcoin. Investors who may have missed bitcoin’s jump are turning to alt-coins for a cheaper option but just as, if not more, volatile. The volatile nature of alt-coins are appealing as some coins have seen up to 500 percent increases or more within a week.