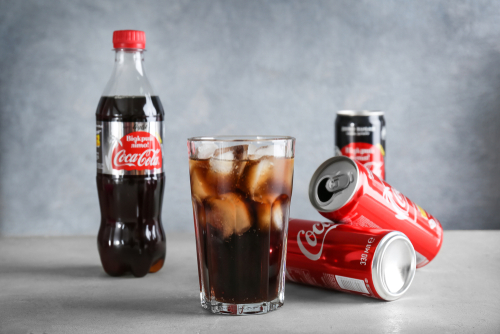 The company posted adjusted earnings of 39 cents, 1 cent higher than analysts’ estimates, according to Thomson Reuters.

Revenue declined 20 percent to $7.5 billion in the fourth quarter. But it still beat analysts’ projection of $7.37 billion.

The company said the decline in revenue is due to the headwinds from the ongoing refranchising of bottling territories.

However, the company reported strong growth in its organic revenue, which is boosted by strong demand for products such as Georgia Coffee and Glaceau vitamin water. Organic revenue rose 6 percent in the fourth quarter, beating analysts’ estimates of 3.65 percent increase.

"I am pleased with our accomplishments and results in 2017," said James Quincey, President and CEO of The Coca-Cola Company. "We achieved or exceeded our full year guidance while driving significant change as we continued to transform into a total beverage company. While there is still much work to do, I am encouraged by our momentum as we head into 2018."

Coca-Cola shares rose more than 2.3 percent in premarket trading on Friday, but it eased most of the gains later and is trading 0.6 percent higher at $45.11.