Altria In Talks To Take Minority Stake In Juul 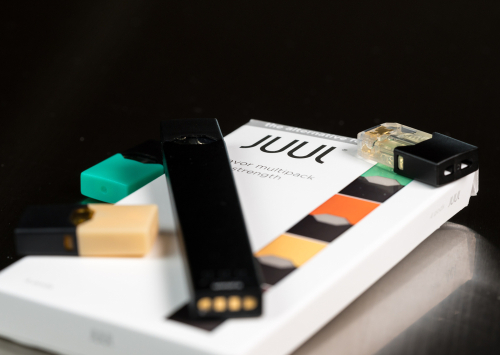 Tobacco Company Altria Group Inc. (NASDAQ: MO) announced on Wednesday that it is in talks to take a minority stake of 20% to 40% in e-cigarette maker Juul Labs Inc.

Big tobacco companies, including Marlboro-maker Altria, have been investing in e-cigarettes as U.S. smoking rates decline, but those products have lost significant market share over the last year as Juul’s popularity has surged.

The talks, which could still fall apart due to the number of shareholders and regulators involved,  have been ongoing for the last few months, and the size of the stake could change. Such a deal could allow Juul to continue to grow with reduced risk while maintaining control of the Company.

Privately-held Juul’s vaping devices, which resemble a USB flash drive, have helped the Company become quickly become the market leader in the U.S. e-cigarette business, growing from 13.6% of the market in early 2017 to more than 75% this month.

Juul’s e-liquid has a much higher nicotine content than earlier versions of U.S. e-cigarettes. The Company says its products are meant only for adults looking to convert from traditional cigarettes.

Earlier this month, the U.S. Food and Drug Administration announced new curbs on sales of flavored tobacco products, including Juul’s mango and cool cucumber, to age-restricted stores and online merchants that use age-verification checks.

Altria has invested in the e-cigarette sector in recent years through its Nu Mark subsidiary, which sells devices such as the MarkTen e-cigarettes in convenience stores and tobacco shops across the country. In 2014, Altria acquired e-cigarette startup GreenSmoke Inc for USD 110 Million.

Altria’s products, however, have lost significant ground to Juul over the last year, as have e-cigarette brands from other major tobacco companies.

San Francisco-based Juul has faced heightened pressure from U.S. regulators as the growing popularity of flavored e-cigarettes among teenagers has sparked fears of a new generation of nicotine addicts.

Federal data released earlier this month showed a 78% increase in high school students who reported using e-cigarettes in the last 30 days, compared with the prior year, coinciding with the rise in Juul’s popularity.

Altria’s shares have fallen by more than 20% over the year as cigarette smoking continues to decline in the United States. Federal data from earlier this month showed cigarette smoking among U.S. adults reached an estimated 14% in 2017, the lowest level ever.