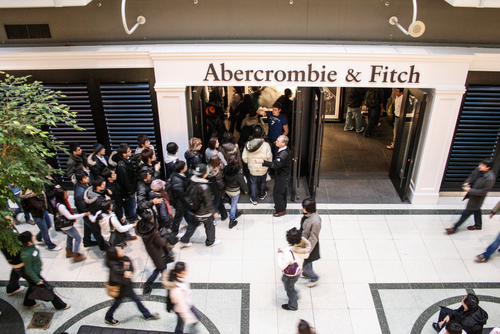 Sales at stores open for at least 12 months grew 3%, better than than the 1.6% increase forecast by analysts. Same-store sales at Hollister were up 4% during the quarter, while those at Abercrombie were up 1%. In the U.S., same-store sales were up 6%, but were down 3% internationally.

Abercrombie said digital sales were up 16% globally, as it continues to invest in its website and more online delivery options.

"We are pleased with our third quarter performance, our fifth consecutive quarter of positive comparable sales, with growth across both of our brands," Chief Executive Officer Fran Horowitz said in the earnings release. "Our strong U.S omnichannel business, and 16% global digital sales growth, confirm that our playbooks are working."

The Company added that it now expects to close fewer stores this year “based on improved performance and successful lease renegotiations.” It had previously planned to shut 60 stores, primarily in the U.S., but is now calling for 40 closures by the end of the year.

"Abercrombie continues to benefit from product and marketing changes, along with store remodels and some help from the fashion cycle," Telsey Advisory Group analyst Dana Telsey said. "The better-than-expected top line performance (with positive comps at both brands along with strength in the domestic business) is an encouraging read."

The Company also announced the promotion of Kristin Scott, who had been leading Hollister, to a new position of Global Brands President. Stacia Andersen, the brand president of Abercrombie & Fitch, will be leaving the Company, it said.

Before Thursday's stock surge, Abercrombie shares had been down about 3% from a year ago.